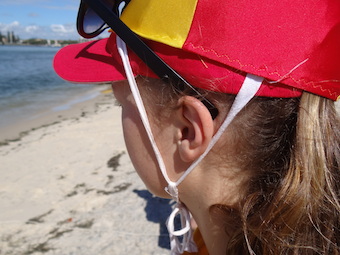 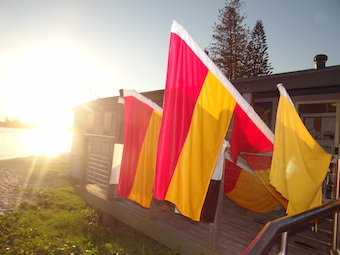 First, a little history about The Royal Life Saving Society

The Royal Life Saving Society (RLSS) was founded in England in 1891 to combat a high drowning toll. The techniques advocated by the Society were soon adopted by many countries and today the RLSS represents the largest single organisation dedicated to the teaching of life saving and the prevention of drowning. The first Australian Branch was formed in New South Wales in 1894 and the movement soon spread to all States, with Queensland Branch (holding its own Royal Charter) opening in 1905.

As this Club is physically located on a passage (which is an inland waterway), although adjacent to the Ocean, the Club has remained affiliated to the RLSS (Queensland Branch).

The History of The Club

The Club was originally formed so a group of men (who trained in life saving at Ithaca Baths) could compete at the Australian Royal Life Saving Championship held in Hobart Tasmania, on 12 March 1954. A new Royal Life Saving Club for men was unusual at the time, as Surf Clubs catered for men, while most Royal Life Saving Clubs had female members. A Notice announcing the Queensland Team (from The Courier Mail Newspaper) dated 25 February 1954 is shown on the right mentioning Club members.

The Ithaca Baths was the home of life Saving in Queensland at the time, with the pool leasee being Mr Frank Venning, who held senior position in both the Royal Life Saving Society and the Surf Life Saving Association. The Ithaca Baths being the home to both organisations, and hence an important name to the Club. Club verbal history is that Frank Venning said to the men, "its time you boys stopped messing around and form a Club". By the late 1950s and early 1960s the Club had grown to a reasonable size. During this time, patrols commenced at Bulcock Beach, Caloundra.

Originally the Beach was patrolled by women only. Later on, men and women patrolled on alternate weekends and mixed patrols began in the 1970s. 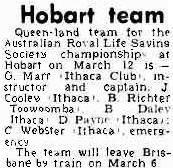 Club Membership is open for application from any person (over 6 years old), that is able to assist the Club in its goals, which are primarily Patrolling our designated beach (Bulcock Beach, Caloundra), and educating members and the public in water safety and life saving techniques.

Our archive collection of photos show some of our early members competing in the Reel and Line and the March Past events in Life Saving competitions. Right from the beginning, the Club colours were Royal Blue and gold - the colours of the sand and the sky.

The original Clubhouse was a tent at the nearby Carvan Park (adjoining the Coast Guard) which was replaced by a semi-permanent timber building. After a storm in the 1970's this building almost fell over and the Club took over an old boat & bait hire shop at Bulcock Beach. This was located on the site of the present Clubhouse building, next to the White Fleet Bait shop which was a general store that hired out boats. Older members have many fond memories of the crowded accommodation and the fun times that they had!

In 2004, the Club celebrated its 50th Anniversary with a reunion of over one hundred and fifty past and present members. It was a great opportunity to swap memories and reminisce about the past as well as make plans for the future.

History of the Word "Ithaca"

The photo to the left was taken in the 1980's, at a Royal Life Saving Society Queensland (RLSSQ) Beach Carnival at Tallebudgera on the Gold Coast. Members can be seen competeing in a March Past event, lowering a reel and line.

The RLSSQ used to run an Annual State Beach Carnival, with all RLSSQ affiliated Club competing, however with only two patrolling Clubs remaining affiliated with RLSSQ, the Carnivals ceased in the 1990's.

Another photo from the same era of members competing in the March Past event. All Life Saving Club's hold a tri-angular pennant stly flag, bearing its Club name. It is traditional that the Club captain is the flag bearer during a March Past.

The Society is now very active in holding pool life saving events, a speciality and discipline of the Society.

On the right is a photo of the old Clubhouse, which was previous one of two a boat hire/bait shops. This photo was taken around 1988/9, just before it was demolished. The present Clubhouse is in the same location, with the stairs (to the beach) to the left of the Clubhouse, being in the same location as the prsent stairs.

The photo is taken from the approximate entrance of the current restuarant 'La Dolce Vita' restuarant, with the tree in the top left, still in the same location today.

A very rare photo taken around 1984 showing the point (which is now eroded away), the Beach (with stumps from diving boards being just visable), and the White Fleet, Bait and Boat Hire to the right of the Clubhouse.

Nearby developments included the Salvation Army (who had a camp on the present Rumba site) and Manchester Unit development who were further down the Esplanade. Many of the surrounding houses and units, were owned as holiday houses (being either used by owners or as holiday rentals), with very few permanent residents. 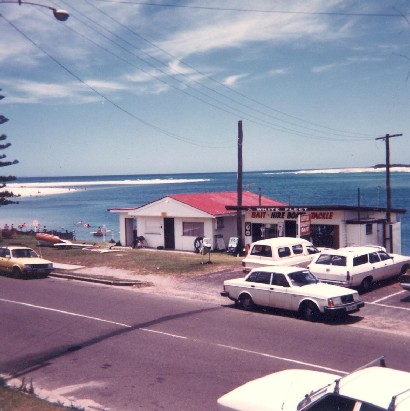 However some well known local resident were 'Ma (Majorie) and Pa (Ben) Bendell' who owned Harmony Lodge Flats (five flats) which were situated near the Clubhouse on the corner of the Esplanade and Leeding Terrace.

Ma and Pa Bendall were two of the world's oldest surf board riders and legendary in the Surfing Community. The couple were among the first surfers to ride waves in Caloundra in the late 1950s, earning fame in Australia and Hawaii after taking up board-riding aged 50 and 51. Pa passed away in 1973 and Ma in 2001, aged 91. The annual Pa and Ma Bendall Memorial Surfing Contest is held in their honour. The site of Harmony Lodge is now a vacant lot, presumerable to be developed into units at some stage.

The White Fleet Boat Hire (to the right of the Clubhouse) was started by Mr Alfred Round in the 1920's who sold it, and the Business had a number of owners over the years. In the 1970's it was operated by the Stokes family, who moved the business to a shop at Cnr The Esplanade & Minchinton St; which was re-developed in the late 1990's and remains a fish & chip shop, however with a different name.